The peace we seek cannot come from weaponry, but from a commitment to justice and nonviolent actions which recognise the dignity of every human person and all creation. We reject models of security that rely on fear, the demonisation of others or on the strength of arms – conventional and nuclear. (Pax Christi Vision Statement 1995) Permanent link to this article: https://paxchristi.org.uk/campaigns/security-disarmament/ 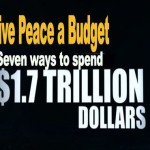 What is more human? The end of want; everyone having enough; the end of social ills of every kind; more knowledge; more culture; respect for the dignity of others; the spirit of poverty; the cooperation for the common good; the will for peace.  Pope Paul V1 Populorum Progressio #21  20 – 23 April 2017   Global …

Latest reports and up-dates  Drone Wars: the next generation.  Report by Joanne Frew, Drone Wars UK, May 2018 Humanitarian impact of drones: report from Women’s International League for Peace and Freedom and Article 36.  October 2017          2016 Drone  Wars: Out of Sight, Our of mind, Out of control – latest resource …

On this page you can find Reports on what Pax Christi  is doing, General Resources, Church Statements & Documents Resources to help make the case against Trident renewal and nuclear deterrence. NEW Trident Briefing produced by Network of Christian Peace Organisations.  For use in preparation  for the Lobby of Parliament in July 2016 , for letter-writing and …