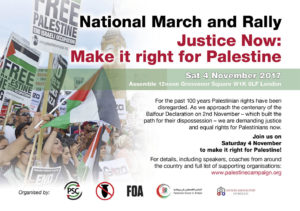 This rally begins in Grosvenor Square and ends in Parliament Square.  Speakers in both places.  Pax Christi is supporting this event.  More details here

Pax Christi  Liverpool calls for repentance for the possession of trident nuclear weapons.  “Nuclear deterrence  and the threat of mutually assured destruction cannot be the basis of a ethics of peaceful coexistence amongst peoples and nations.”     Pope Francis

Join us on  ash Wednesday to express our sorrow for the possession of Trident nuclear weapons.  Make a Banner or bring musical instrument

Process  through Liverpool City  Center pausing for prayer and reflection. Gather 12 noon at st Luke’s  bombed church and  finishing at 1pm at the Queen Elizabeth Law courts . This  witness is in solidarity with those gathering at the Ministry of Defence in Whitehall.  Make a Banner or bring musical instrument

Read more
Categories: Liturgy Protest action
Ash Wednesday gathering, Glasgow Catholic Worker, Faslane @ South Gate, Faslane
Tickets
Feb 14 @ 2:45 pm – 3:45 pm
This event is organised by the Glasgow Catholic Worker
Faslane -South Gate of Faslane at 2:45pm
Join us for our annual Ash Wednesday Service of Repentance and Resistance at the home of the UK’s weapons of mass destruction.
We start at the car park next to the South Gate where we will mark each other with ashes and then process with the cross to the South Gate accompanied by readings, prayers and hymns.
All are welcome. There will be transport available from Glasgow.
Read more
Categories: Liturgy Protest action
Ash Wednesday service Repentance and Hope in our nuclear age @ Ministry of Defence,
Tickets
Feb 14 @ 3:00 pm – 4:15 pm 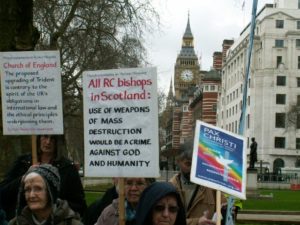 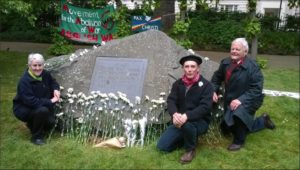