Easter Sunday 2019: Theresa Alessandro introduced herself to readers of  The Universe: NJPN comment

April 2019: Valerie Flessati and Pat Gaffney from Pax Christi British Section were among more than 60 people 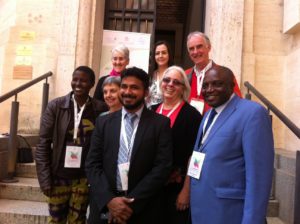 who met at the Vatican on 4 & 5 April for a joint gathering, “Path of Nonviolence: Towards a Culture of Peace.”  organised by the Vatican’s Dicastery for Promoting Integral Human Development and Pax Christi International’s Catholic Nonviolence Initiative .

With a consideration and understanding of current situations of conflict and violence, participants engaged in dialogue about the roots of violence, the hope for peace and reconciliation, and reflected on paths to a conversion to nonviolence. They noted that nonviolence is not only a method but a way of life, a way to protect and care for the conditions of life for today and tomorrow.

Members of the CNI roundtable on the Power of Nonviolence, which was co-convened by Pat Gaffney and Rose Berger, were able to give testimony to the effectiveness of nonviolence – these included Pietro Ameglio from Mexico, Kanini Kimau from Kenya, Rania Murra from Palestine and Jean Baptiste Talla from Cameroon.

“Our conversations on nonviolence and peace filled our hearts and minds with a consideration of the dignity of each person – young people, women and men, people who are impoverished, citizens and leaders,” said Mons. Bruno Marie Duffé, Secretary of the Dicastery. “Nonviolence and peace call us to a conversion to receive and to give, to gather and to hope.” 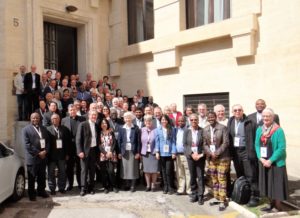 Path of Nonviolence: Towards a Culture of Peace – Photo Pax Christi International

“Pax Christi International deeply appreciates the support and participation of the Dicastery in this workshop, which has been a significant and positive step in the work of the Catholic Nonviolence Initiative,” said Marie Dennis, Co-president of Pax Christi International. “We are touched by the interventions from all the participants, who reiterated the importance of nonviolence rooted in respect, patience and spiritual strength.”

Participants will continue their dialogue and research; their reflections will be shared with the Holy Father, with the hope for a possible encyclical that will address these issues and challenges and will promote nonviolent initiatives as a way for mediation, rights, hope and love.

“We need to be artisans of peace, for building peace that is a craft that demands serenity, creativity, sensitivity and skills.” (Pope Francis, Apostolic Exhortation Gaudate et Exultate, 19 March 2018) – Report from Pat Gaffney 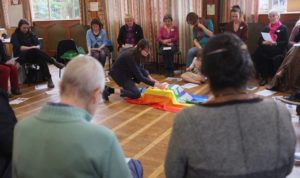 Women peacemakers gathered in Birmingham on March 9th to explore their commitment to peace, in an event facilitated by Pax Christi for International Women’s Day. First those attending spoke of women peacemakers who had inspired them. Then they shared their own experiences across generations and traditions, reflecting more deeply on what motivates and supports them. Film-maker Zoe Broughton, and her daughter Mati, created a dynamic record of the event. The Pax Christi team will further develop the footage and photographs into creative resources for the future. Young Peace Journalist Clare Shanley attended the event and has written a reflective article which will feature in the next edition of JustPeace. More pictures here 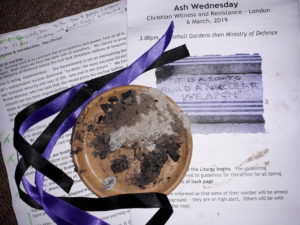 Another cold, wet Ash Wednesday but this did not stop more than a hundred people gathering for prayer at the Ministry of Defence in London to call for a change of heart away from policies of security based on the threat and use of nuclear weapons.  Similar events took place in Liverpool and Glasgow .

This was the 37th  year of Ash Wednesday witness to nuclear war preparations, supported again this year by Christian CND and the London Catholic Worker.  Among those joining  were religious sisters, members of Justice and Peace Links, the Columban Faith & Justice team, Westminster Justice and Peace, Kent Christian Peace Activists and members of the Nipponzan Myohoji Buddhist Order. The liturgy took place in the context of a nation that still places nuclear weapons at the heart of its defence policy and with a Prime Minister who has said she would press the nuclear button. 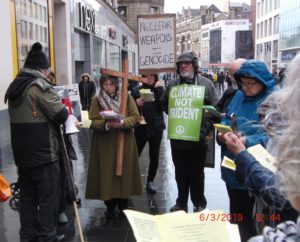 Part of the liturgy involved tying black and purple ribbons to a railing along the building – these represented the countries that have so far failed to support or sign the Treaty on the Prohibition of Nuclear Weapons.  Then, in front of the Ministry of Defence Building, participants helped to form the word REPENT in ash on a large sheet of sack-cloth, recognising their own need of repentance and inviting the Government to turn away from nuclear war preparations.  As the gathering faced the building powerful words from Archbishop Paul Gallagher, head of the Holy See delegation to the New York meetings on the Treaty were read out,  “Every signature, every ratification of this Treaty constitutes an important  step toward the achievement of a nuclear-free world”. The Vatican was one of the first states to sign and ratify the Treaty.  A Methodist minister attending said, “This was a really profound way to spend Ash Wednesday, joining Pax Christi for Christian witness to the MoDs preparations  for the deployment of weapons of mass destruction.”

Pax Christi Executive committee member, Jan Harper, coordinated an Ash Wednesday event in Liverpool city centre where around fifty people attended.   Jan said, “It felt very good to be out there and knowing we are part of a bigger movement. Our gathering was mentioned on  Radio Merseyside and one  young  man  came as a result. We were joined by members of Merseyside CND. ”

37 years of prayer  at the Ministry of Defence, London on Ash Wednesday, 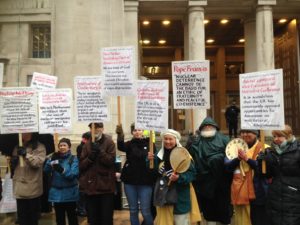 Since 1982 Christians have gathered on Ash Wednesday at the Ministry of Defence in London, to pray for peace and a conversion of hearts and minds, away from nuclear war preparations, the destruction caused by nuclear testing and  the wasted resources that are invested in nuclear weapons.

Again this Lent, 6 March 2019, there will be a service and pilgrimage around the Ministry of Defence building, to challenge the on-going policies of the UK Government  which is set on maintaining  the UK’s independent nuclear deterrent. Those taking part will pray for their own need to change and take responsible action for peace as citizens .  Fr Joe Ryan Chair of Westminster Justice & Peace commission  will bless and distribute ashes during the gathering.  These will be used to mark out the word REPENT  in the final prayer on the pavement in front of the Ministry of Defence building.  Those taking part will process the whole length of the Ministry of Defence building, tying purple and black ribbons to the fence – these represent the 125 countries who have not yet signed the Treaty on the Prohibition of Nuclear Weapons.

On the same day , Pax Christi Liverpool will hold a service in Liverpool City Centre, beginning at 12 noon in the bombed out St Luke’s Church.  In Scotland the Glasgow Catholic Worker will meet at 2.45 at the South Gate at the Faslane Naval Base near Helensburgh.

The London event is organised by Pax Christi, the London Catholic Worker and Christian CND

Encouraged by Peace Sunday Celebrations in England and Wales – January 2019 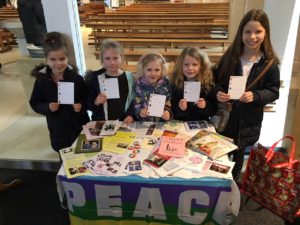 From the Isle of Wight to Durham, Pax Christi members are excelling themselves in preparing to mark Peace Sunday on 20 January.

Prayer cards, information leaflets, liturgy booklets, scripts for talks and  children’s activity resources are flying out of the office to ensure that the World Peace Day Message, “Good politics serves peace”  is shared within the Catholic community in England and Wales.   Pax Christi’s education worker, Aisling Griffin has produced a special Assembly for schools, reflecting on politics and peacemaking . One parish has created a script which confirmation candidates will use to highlight the Pope’s message.

In a Southampton parish, an afternoon meeting has been arranged with Fr Gerry McFlynn of Pax Christi and the Irish Chaplaincy leading a discussion on Blessed are the Peacemakers. In York, Middlesbrough Justice and Peace Commission have organised a meeting with speaker Chris Cole.   Chris is Director of Drone Wars UK and a member of Pax Christi Executive Committee.  In Harpenden  a  gathering has been arranged where Pax Christi’s Pat Gaffney will speak on the theme Pope Francis Calls us to be Peacemakers – Pax Christi responds.  Pax Christi members and staff will speak  in parishes in Leeds, Isle of Wight, Leicester, Barnet, North London, Central London, Abingdon, Liverpool, Kent, Oxford,and beyond.

Peter Hickey who coordinates member support in Pax Christi said:  We have seen such great feedback this year from our members who have all been encouraged to respond to the Popes Peace Day Message. Whether it’s through ordering  from our online shop or downloading materials,  members are getting in touch to tell us about events in the planning – we in the office continue to be so encouraged to see our members working to promote peace in their own communities.

Meanwhile, in Scotland, where Pax Christi has just been launched, Bruce Kent will be speaking at Masses in Musselbrugh at the invitation of Justice and Peace Commission  Edinburgh.  Bruce will also have meetings with Justice and Peace Scotland in Glasgow.

In his letter to parishes Archbishop Malcolm McMahon, National President of Pax Christi said: Working nationally, with a team of 4 staff and volunteers, a huge amount is achieved through the outreach work and resources produced by Pax Christi.   Many parishes take special collections on or around Peace Sunday – this support is so important to enable the work to continue.

Because of Pax Christi’s faithful promotion of the World Peace Day Message since 1967, England and Wales are among the few countries who seek to educate and inform the Catholic community of the theme in accessible and creative ways.

Permanent link to this article: https://paxchristi.org.uk/news-and-events/news-reports/2019-2/