Today well over a hundred people came together in Central London for the annual commemoration of International Conscientious Objector Day.  Pax Christi members as well as some of the office team gathered together with various groups from the peace movement to celebrate and remember those who refused to fight and continue to suffer persecution today for refusing to engage in violence and war. 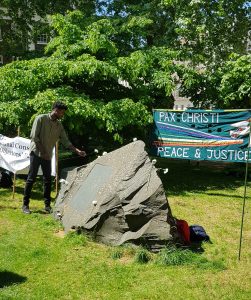 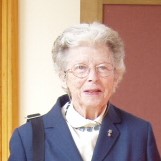 The following Tribute was given by Pax Christi’s Valerie Flessati at Peggy’s funeral at St Thomas Mores Church, London on 17 April 2018

Not long after she moved back to London from Cornwall – so around 1977 – Peggy answered an advertisement in St Dominic’s parish newsletter.  Pax Christi, the international Catholic peace movement, was based at the priory and we needed help.

Pax Christi’s blend of faith and politics matched Peggy’s lifelong interests and she soon became an indispensable member of the office team, volunteering two days a week and involved in every aspect of its life.  Our small organisation gave plenty of scope to her tremendous gifts, her competence and creativity, and over more than 25 years her active contribution to Pax Christi was immeasurable.  Full text here 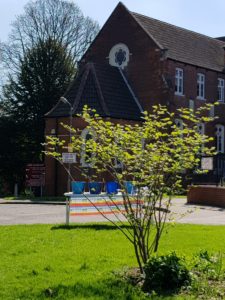 For yet another year it seems Education has come top of the list for students and parents today at St. Josephs school in Hendon for the Global Day of Action on Military Spending.

Members of the Pax Christi office team set up in the warm sunshine today to greet parents, students and teachers and ask them to vote on how they would each spend £48 billion! Everyone was presented with their own £48 billion (in the form of 4 buttons!) and then asked to divide the “money” as they wished between the following choices of investment: Education & Healthcare; Tackling Climate Change; International cooperation and lastly the Arms and Military intervention.

It was great to see so many youngsters so eager to have their voices heard on such an important issue and great to listen to the concerns and questions from our youngest citizens. 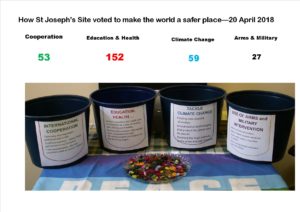 The UK is the 6th largest military spender in the world. Globally military spending stands at $1.75 trillion. GDAMS offers ordinary people an opportunity to think of what will make for a safer world.

GDAMs urges that military spending to be redirected towards social and environmental needs. These needs should take priority over aircraft carriers, long range strike aircraft, armed drones, weapons exports and weapons of mass destruction. In addition we also need new thinking involving civil society and government to create a clear programme of  action for spending, research and investment to build sustainable, common security at national and                 international levels.

Missed us today? Why not take the survey online!

18 April 2018, Pax Christi signs letter in The Guardian: Time to take a stand on Gaza killings

MPs, MEPs, former ministers, trade unionists and other political and cultural figures call on the British government to ensure that UK arms, finance and trade are not used to support unlawful actions by Israel.

We call on the government to condemn publicly Israel’s actions; to support an immediate UN investigation into the killings; and to ensure UK arms, finance and trade are not used to support Israel’s unlawful actions. The British government must fulfil its responsibilities to hold Israel accountable and to bring about the end of Israel’s unlawful siege and the military occupation of Gaza, East Jerusalem and the West Bank.  Full letter here 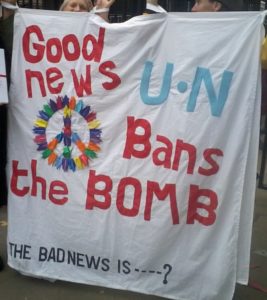 31 organistions, including Pax Christi, have written to Secretary of State for Foreign Affairs, to urge  the UK Government  to use the imminent Non-Proliferation Treaty (NPT) Preparatory Committee meeting to recognise and act upon the UK’s international obligation to work for a world free of nuclear weapons.

In addition the letter encourages the UK Government to participate in the up-coming UN High Level International Conference on Nuclear Disarmament and to use the opportunity to develop relations with NNWS and make progress on the UK’s disarmament obligations. Full text of letter 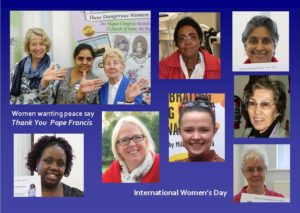 launched a project inviting women around the world to write  to Pope Francis to thank him for his leadership on peace, nonviolence and disarmament and to share a vision of peace with him.  Pax Christi UK produced lively postcards for women to send directly to Rome and Pax Christi International created an on-line tool for similar messages.

“Dear Pope Francis: As a woman who wants peace, I am grateful for your leadership in affirming the gospel call to nonviolence and just peace and for your constant appeal for nuclear disarmament and an end to the arms trade.” 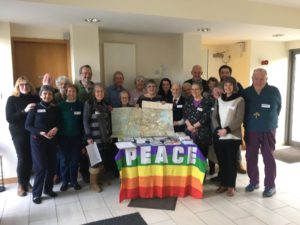 More than twenty-five members and supporters of Pax Christi in Scotland gathered at the Ignation Spirituality Centre in Glasgow for a day facilitated by Pat Gaffney to explore how members might be better served and organised for peace work in Scotland.  A wealth of experiences and traditions were shared and the following were highlighted as  strengths of being a part of the Pax Christi family

Permanent link to this article: https://paxchristi.org.uk/news-and-events/news-reports/january-april-2018/