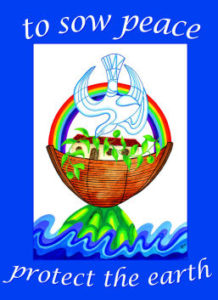 31st March: Pax Christi organised an online prayer hour in solidarity with Extinction Rebellion Faith Communities who were holding a Lent vigil outside the houses of parliament, before moving online due to coronavirus restrictions. Almost 50 people attended the online session focussing on climate and peace, and also prayers for those affected by the virus.

30th March: As part of the ecumenical Network of Christian Peace Organisations, Pax Christi co-ordinated an open letter on coronavirus and the UN call for a global ceasefire.

27th March: Pax Christi International called on the US government to suspend sanctions affecting Iran, Syria and Gaza, for humanitarian reasons in order to focus on efforts to deal with the virus.

25th March:  Our Director, Theresa, made this statement in the light of Coronavirus:

‘In these difficult times, Pax Christi members are inspired by the drastic measures we are all prepared to take, in order to try and save the lives of the most vulnerable in our communities. We see bright glimpses of the gospel being truly lived.
We endorse the call of Antonio Guterres, UN Secretary-General, for a global ceasefire so that the world can focus instead on dealing with this new threat.
We have been encouraged to see how readily British manufacturers can adapt their skills and machinery to producing ventilators. Now we can bear witness that it is possible for our industries to be diversified, when the political will is there.
We welcome an additional hospital and have appreciated the irony of it being the London ExCel Centre – which usually hosts the huge DSEI Arms Fair – that is now being turned to this life-saving purpose. These events have renewed our hope for a world in which we might manufacture goods that support life, rather than weapons which destroy it. We might fund services, like healthcare and libraries, instead of sinking huge amounts of money into British nuclear weapons which have no power at all over a tiny, horrible virus. We could reduce the injustice and inequality which will now make a life and death difference to some.
We are keeping in our prayers all those whose lives are affected by coronavirus. When the restrictions are lifted, we pray too that we will be ready to live differently because of what we have seen and heard.’

19th March: There was one last Leicester City Council full meeting before the coronavirus intervened. Pax Christi is part of a working group encouraging the Council to endorse the nuclear weapons ban treaty as part of the ICAN cities appeal. Our Director, Theresa, attended the meeting with partners from Leicester CND and Community of Christ. Anthony Matthew of Leicester CND asked a question of Peter Soulsby the elected mayor and presented a petition. Peter Soulsby advised that he believes Leicester City Council will endorse the nuclear weapons ban treaty at the next council meeting – although due to coronavirus the date of the next meeting cannot be fixed yet. Reported in Independent Catholic News. 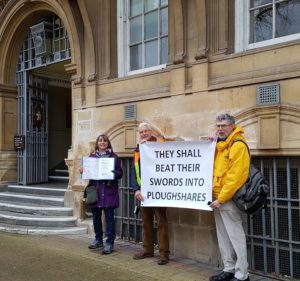 17th March: Due to coronavirus restrictions, the Pax Christi office was forced to temporarily close and staff began working from home, along with many others around England & Wales.

4th March: For International Women’s Day.  Pax Christi and London Catholic Worker hosted Kate Hennessy for an evening. Kate spoke about her grandmother Dorothy Day and her book The World Will be Saved by Beauty. In the book, Kate writes about Dorothy’s life through the lens of the relationship between Dorothy and her daughter Tamar,

Pax Christi Vice-President, Valerie Flessati, introduced Kate and gave a thumbnail sketch of Dorothy. Then  Kate spoke personally to those gathered in the packed room in Bloomsbury Central Baptist Church. She generously answered a range of questions, including some from Catholic Worker member, Mirjam Johansson. It was a thought-provoking and powerful event. We made an audio-recording which will be available soon. Independent Catholic News reported on the event.

Valerie presented Kate with a set of photographs of Dorothy speaking at a Pax conference in Spode in 1963 during one of her visits to England. 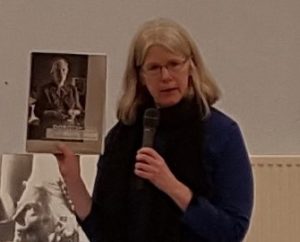 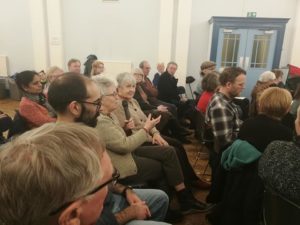 Lent:  Our Director, Theresa, wrote about NonvioLent in The Universe. 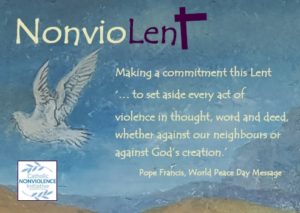 Ash Wednesday Witness Events:
Liverpool: Pax Christi members and friends organised a powerful witness in the centre of Liverpool.  Ashes were distributed and a message and petition handed in to the mayor in support of nuclear ban communities. Members are encouraging Liverpool to endorse the UN Nuclear Weapons Ban Treaty, as part of the ICAN Cities Appeal. 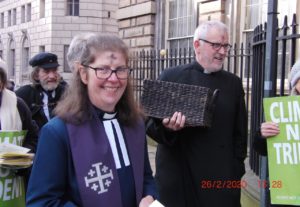 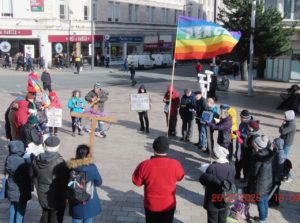 Coventry: Pax Christi members in Coventry held their first Ash Wednesday Prayer Vigil, in solidarity with those in London, Liverpool and Faslane. They carried a Lampedusa Cross as sign of hope, solidarity and love for all those who suffer the effects of war. Each person carried  two small, olive wood crosses from Bethlehem, one to lay on the altar of the Ruins and one to each carry for their Lenten Journey. The event was reported in Independent Catholic News. 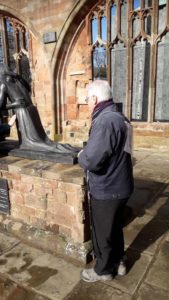 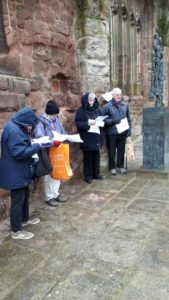 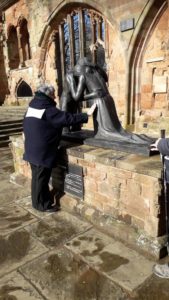 London: A witness was held at the Ministry of Defence, calling for an end to nuclear weapons in our country. The liturgy was organised jointly with Christian CND and London Catholic Worker. The event has been held since 1982. This year we were joined by Ash Angels representing Extinction Rebellion Peace. The witness was reported in Independent Catholic News. 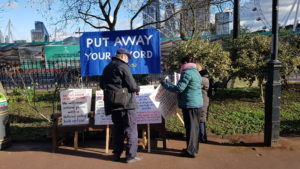 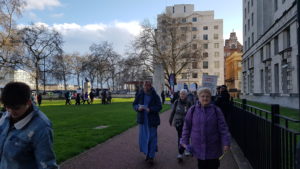 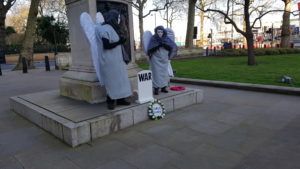 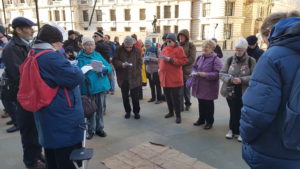 An Ash Wednesday witness event was also held in Faslane, supported by Justice and Peace Scotland and Glasgow Catholic Worker.

February 23rd: An ACTA event. Our Director, Theresa, was invited to speak to the ACTA Birmingham group. She caught up with Pax Christi members and friends from Birmingham and spoke about nonviolence, and NonvioLent. There was a good discussion and a beautiful poetry reflection from Clare J. We look forward to hearing more from Birmingham when the Pax Christi Icon is there in March for a range of events. 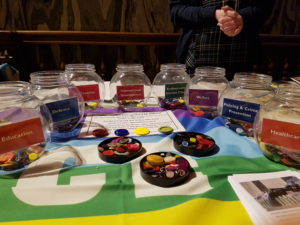 Pax Christi was invited by the Bishops’ Conference of England & Wales to coordinate one of the spaces at the God Who Speaks Scripture Roadshow in Westminster Cathedral. The roadshow ran from 30th Jan to 1st February.  Our space was called ‘Living the Word’ and was filled by Pax Christi, Westminster Justice & Peace Commission, Caritas Westminster, Jesuit Refugee Service and the Environment office of the Bishops’ Conference. Many visitors came to see us during the event. Friends old and new admired the Icon of Reconciliation and picked up cards reminding us of the scripture references that inform our work. ‘Nation will not lift up sword against nation…’ Lots of schoolchildren also came to find out more about peace. Aisling, our education worker, challenged them to spend the military budget differently! Peacemaker Greeting Cards and Acrostic poems were popular. One child wrote ‘E’ is for ‘Everyone can be a peacemaker’. 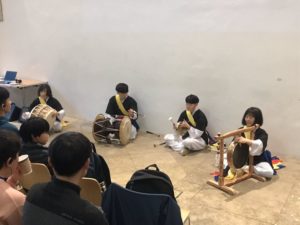 Bargn Nuri is an intentional Christian community in South Korea. Pax Christi Director, Theresa Alessandro, met with 60 members of the community on their visit to London as part of their 1000-day Life and Peace Pilgrimage. Hosted by Christian CND and Anglican Pacifist Fellowship at St Ethelburga’s in London, Theresa co-chaired an inspiring morning in which Pax Christi Vice-President Bruce Kent, CND’s Kate Hudson and Christian CND’s Martin Tiller shared their thoughts on current challenges and perspectives on peacebuilding in this country – especially in relation to nuclear weapons and to climate change. Cheolho Choi, the leader of the Bargn Nuri community, spoke about their vision of a unified Korea in which people will be able to flourish in peace, living ecologically-balanced village community lifestyles as the  Bargn Nuri already practice. Cheolho said ‘Violence cannot achieve peace. The only way to achieve peace is peace itself’. You can read more here about the event, the community and Cheolho’s challenge to peacemakers in this country. the group moved on to Geneva where the met representatives of the World Council of Churches.

January 3rd Killing of General Qassem Suleimani and others by American drone strike.  Statements made in response:

Pax Christi USA Executive Director Johnny Zokovitch: ‘Such actions go against everything we stand for as people of faith and are incompatible with the message of Jesus.’
Pope Francis: “I call on all parties to keep the flame of dialogue, and self-control, burning and to ward off the shadow of enmity.”
Analysis from Eli McCarthy, Paul Rogers and Richard Reeve, Rose Marie Berger,  Jim Wallis and Cardinal Turkson. There is also a radio interview with Paul Rogers

New Year: Theresa Alessandro wrote the NJPN column in The Catholic Universe for the very beginning of the year, focussing on Palestine and Israel.

Permanent link to this article: https://paxchristi.org.uk/news-and-events/news-reports/january-march-2020/