There is a report in the latest Oldham Peace Times about a recent visit by Matt, our education worker, to Holy Rosary Primary in Oldham.

Holy Rosary is the latest Oldham school to sign the Pledge to Peace and our visit was to help the children begin to think about what it means to be a peacemaker as they begin the journey towards becoming a school for peace. 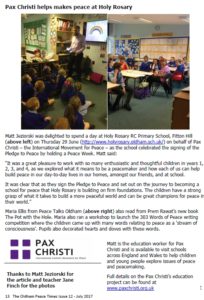 Oldham council became the first in the UK  to sign the Pledge to Peace in 2015 and since then a number of local schools, community projects, and civic organisations have also become signatories as they work together to make Oldham a more peaceful borough.

Permanent link to this article: https://paxchristi.org.uk/2017/07/20/pax-christi-helps-make-peace-at-holy-rosary/

Working with the St Paul’s Catholic School in Milton Keynes and the Northampton Youth Ministry Office, Pax Christi co-organised the first Northampton Diocesan Schools Faith in Action Day held at St Paul’s on Thursday 6 July 2017. Below is the press release about the day which was attended by students from five of the high schools of the diocese. 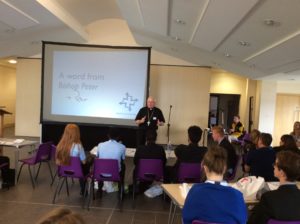 Young people from around the region gathered at St Paul’s Catholic School for the first Northampton Diocesan Faith in Action Day.  Year 9 and 10 students from Thornton College in Thornton, St Thomas Becket in Northampton, St Thomas More in Bedford and Cardinal Newman in Luton joined pupils from St Paul’s to explore how, as Christians, we put our faith into action in our daily lives.

The Conference, organised jointly by St Paul’s, Pax Christi, and the Northampton Youth Ministry Office, began with pupils having the opportunity to ask questions of guest of honour, The Rt Revd Peter Doyle, Bishop of Northampton.  One pupil asked Bishop Peter “what makes you really fulfilled?” and his answer was “being open to God”.  They then participated in a series of workshops run by Columbans UK, Pax Christi, The Young Christian Workers and Northampton Youth Ministry Office.

Jennifer Rowlands, RE Teacher at St Paul’s, said:  “We held our first St Paul’s Faith in Action Day last year and thought that this year it would be a great idea to open it up to other schools and build networks between local Catholic high schools in the Diocese.”

Aleksandra Wiencis, from St Paul’s Catholic School, said: “I liked the fact that we could connect with  students from other Catholic schools’ while Dominika Mazur, also from St Paul’s, said: ‘It was really fun. I enjoyed meeting other people from other schools and getting to know how they practice their faith.” 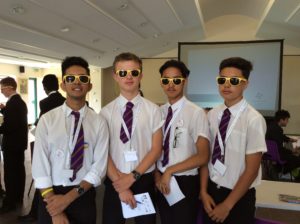 Delegates received conference packs which contained a variety of items including sunglasses, highlighters and chocolate bars.  They also took away a conference booklet that was full of practical ideas for putting faith into action.

Matt Jeziorski of Pax Christi added, “We have been delighted with the response to this first Diocesan Faith in Action Day. It has been so well supported by the schools, the enthusiasm of the students generated a wonderful atmosphere, and the hard work of the organising team has really paid off. We are already looking forward to next year.” 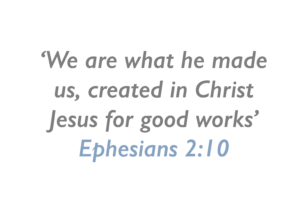 Permanent link to this article: https://paxchristi.org.uk/2017/07/11/northampton-schools-faith-in-action-day/

Responding to hate with love – new assembly on nonviolence

Among the gifts presented to President Trump by Pope Francis this week was a copy of his message for World Peace Day 2017, Nonviolence: a Style of Politics for Peace.

In a week when we have been horrified by the terrorist attack in Manchester this gift is particularly timely. It reminds us that the best response to a world of too much violence and injustice is more love and more goodness – a response we have seen so powerfully from the people of Manchester over the past few days.

This assembly reflects on the Christian vocation to nonviolence and how it challenges us to act by responding to hate with love.

I ask God to help all of us to cultivate nonviolence in our most personal thoughts and values. May charity and nonviolence govern how we treat each other as individuals, within society and in international life.
(Pope Francis, Message for World Peace Day 2017)

Permanent link to this article: https://paxchristi.org.uk/2017/05/25/responding-to-hate-with-love-new-assembly-on-nonviolence/

Join Pax Christi this summer for a Coast-to-Coast cycling pilgrimage for peace in support of our peace education work and the Christian Peace Education Fund.

Setting off from Barrow-in-Furness, the home of the UK’s nuclear fleet, on Friday 18 August we will reach Whitby on Monday 21 August and doff our cycling caps in honour of St Hilda.

A registration fee (£20 for the Coast-to-Coast / £5 for The Last Leg) is needed to secure your participation. Deadline for registrations is Tuesday 30 May

Register your interest by emailing education@paxchristi.org.uk or calling the Pax Christi office (0208 203 4884) 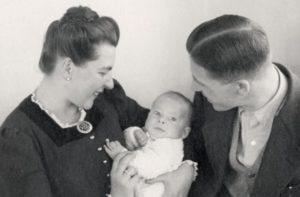 On Saturday 18 March Pope Francis will beatify the Italian layman Josef Mayr-Nusser: A Martyr for Conscience

Sentenced to death because of his faith when his conscience would not allow him to make an oath of loyalty to Hitler, Josef Mayr-Nusser died on 24 February 1945 in a cattle wagon on the way to Dachau concentration camp where he was to be shot.

We have produced an assembly resource to mark the occasion of the beatification of Bl. Josef, celebrating his life and the lessons we can learn from his courageous witness.

Permanent link to this article: https://paxchristi.org.uk/2017/03/15/assembly-blessed-josef-mayr-nusser-martyr-for-conscience/