The Reverend Mary Gregory, Canon for Arts and Reconciliation at Coventry Cathedral, gave an inspiring talk at the 2022 AGM, the transcript of her talk can be found here and questions used in the ensuing group work can be found below.

You will find these papers particularly helpful if you are joining the AGM online.

After the Reverend Mary Gregory’s talk at the AGM Engaged, Wounded: Reframing Ourselves for Peace and Reconciliation, participants will discuss Esther 4.1-16 using the following questions:

Please find below 2022 Annual Report; invitation to AGM; role description for Members of the Executive; registration and voting information; details of resolutions and nominations for those standing for election; 2021 AGM Minutes; and Agenda for 2022 AGM.

Note that nominations need to be received by 5pm on Saturday 4 June. We aim to have final details of nominations and resolutions on this page by Wednesday 8 June.

Our 2022 Annual Report is available here.

The invitation to our 2022 AGM is available here.

Our June E-bulletin is available here.

Our May E-bulletin can be found here.

Our March/ April E-bulletin is available here. *Please note that the Pax Christi International Synod on Synodality zoom is at 7pm BST*

Our March E-Bulletin can be found here.

Our February E-bulletin is available here.

February – March – Pax Christi supporters write on the work of art, music, or literature which had influenced them to work for peace and justice.

December – January with 2022 poster and hints for promoting Peace Sunday

Our Peace Sunday E-bulletin can be found here.

The December Justpeace Dec 2019 with a poster for Peace Sunday.

October Justpeace our theme is nonviolence. There is an update on the Catholic Nonviolence Initiative from Pat Gaffney and stories of nonviolence in practice.

August 2019 issue we focus on Peace Education, an important strand of our work, and learn about some inspiring young people engaging in peace, justice and environmental issues.

June 2019 issue, we reflect on some important pieces of work: the first World War Peace Forum, the Catholic Nonviolence Initiative, our 2019 AGM and an event in Birmingham around International Women’s Day.

February 2019 issue we welcome Theresa Alessandro and say farewell to Pat Gaffney who looks back over 29 years of working for Pax Christi. 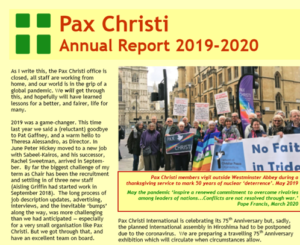 Permanent link to this article: https://paxchristi.org.uk/resources/newsletter/