Drone  Wars: Out of Sight, Our of mind, Out of control – latest resource from the Drone Campaign Network of which Pax Christi is a member.  Written by Chris Cole, Director of Drone Wars UK and Pax Christi Executive Committee member.  Chris says: Drones are at the forefront of the rehabilitation of the idea of war itself.  Through using remote systems and precision weapons, we are being told, war is no longer the hell it once was…” 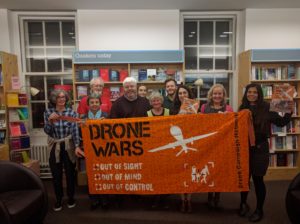 Pax Christi and Drones: Pax Christi believes that the use of armed drones is a new challenge to the morality of warfare and that they challenge our concept of security. Pax Christi Statement on Drones   (March 2013)

Permanent link to this article: https://paxchristi.org.uk/campaigns/security-disarmament/drones/