Over the coming  years Pax Christi  will be preparing events and creating resources to ensure that the 2014-2018 commemorations reflect the need for repentance and  change  and lead to a commitment to peacemaking.  Here we offer information on  events, articles and talks, general resources, films and visuals, and resources for services and vigils  Also see resources for schools and young people 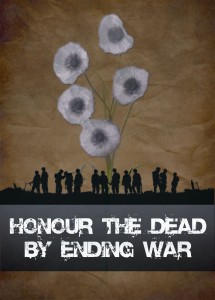 BELOW: RESOURCES ON FWW CONSCIENTIOUS OBJECTORS AND PEACE INITIATIVES O THE TIME 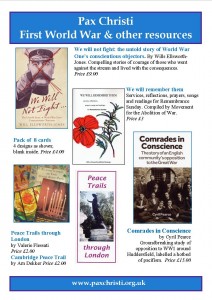 Website Documenting Dissent  with stories of FWW Conscientious  Objectors and women peacemakers with a focus on Lancashire.   October 2015

Commemorative Programme from the 15 May  2014 CO event in London with short biographies and photographs of those COs who were remembered and whose families took part in the event.

Arming all sides: a new website to compare &  contrast arms trade before during and after First World War  August 2014

These Dangerous Women: A documentary about the women who tried to stop the First World War.  They became the Women’s International League for Peace & Freedom which celebrates its centenary on 28 April 2015 (April 2015)

The War Prayer: an animation of Mark Twain”s story which is an indictment of  the Philippine-American war 1899-1902.  Produced by Markos Kounalakis 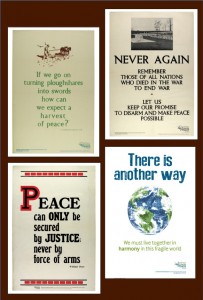 Peace headlines from papers during FWW

Permanent link to this article: https://paxchristi.org.uk/first-world-war-peace-plans/