On this page you can find Reports on what Pax Christi  is doing, General Resources, Church Statements & Documents

Resources to help make the case against Trident renewal and nuclear deterrence.

ICAN issued Let’s Be Realistic, a booklet answering common questions/beliefs about nuclear deterrence and nuclear weapons. The booklet might help you work through conversations with people and is good for sharing too.

May 27th 2020 : Launch of a report produced by Pax Christi as part of an interfaith working group: Banks, Pensions & Nuclear Weapons: Investing In Change. Data presented assists people to challenge their bank or pension provider on investment that supports nuclear weapons manufacture.

Articles questioning spending on British nuclear weapons in the light of the challenges of coronavirus:

Article written by Pax Christi Director Theresa Alessandro in The Universe Imagine a world without nuclear weapons: it isn’t hard to do..

Trident Briefing produced by Network of Christian Peace Organisations.  For use in preparation  for the Lobby of Parliament in July 2016 , for letter-writing and meetings.  Paper copies available from Pax Christi .

600 people gathered for the ICAN Civil Forum at this Conference.   Pax Christi International took part as did UK member Martin Birdseye.  Read Martin’s blog .  Here is a report of the Forum meeting

A new nuclear abolition resource was launched last week in Vienna by Religions for Peace at its assembly of 600 religious leaders. Nuclear weapons pose an existential threat to humanity, say religious leaders and believers must act to bridge the political divides that fuel the nuclear arms race.

The very possession of nuclear weapons will continue to come at an enormous financial cost. The expenditures, current and projected, represent resources that could, and indeed should, be put toward the development of societies and people. Pope Francis put it strongly in his message to the President of the Vienna Conference on the humanitarian consequences of nuclear weapons: “Spending on nuclear weapons squanders the wealth of nations. To prioritize such spending is a mistake and a misallocation of resources which would be far better invested in the areas of integral human development, education, health and the fight against extreme poverty. When these resources are squandered, the poor and the weak living on the margins of society pay the price.”

I would like to develop my reflection on the topic under three sub-themes:First, the Popes and the constant call for the abolition of nuclear weapons; Second, Pope Francis and the Humanitarian Impact of Nuclear Weapons; and Third, Some Elements of the Holy See’s call for nuclear disarmament….

” Nuclear deterrence and the threat of mutually  assured destruction cannot be the basis for an ethics of fraternity and peaceful coexistence among peoples and states.  The youth of today and tomorrow deserve far more…Spending on nuclear weapons squanders the wealth of nations.  To prioritize such spending is a mistake and a misallocation of resources which would be far better invested in the areas of integral human development, education, health and the fight against extreme poverty.

Permanent link to this article: https://paxchristi.org.uk/campaigns/security-disarmament/nuclear/ 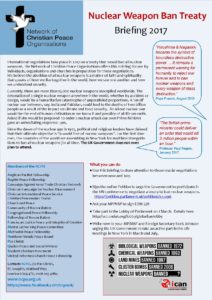 2020 October: We expect the 50th ratification of the Treaty on the Prohibition of Nuclear Weapons soon. Some documents to help you feel informed: Another excellent briefing from the International Campaign to Abolish Nuclear Weapons (ICAN) Pax Christi briefing: Nuclear Weapons and the Catholic Church Great piece from Ray Acheson at WILPF: ‘The idea that …