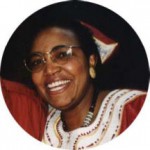 Wamuyu Wachira belongs to the Loreto Sisters, a Catholic congregation also known as the Institute of the Blessed Virgin Mary (IBVM). In a terrible assault on a girls’ secondary school in 1991, boys from a neighbouring school attacked the girls in their dormitory. Nineteen girls died, 71 were raped, and the rest were traumatised. Questioned by the media, the female deputy principal explained: “The boys never meant any harm against the girls. They just wanted to rape”. This and several other horrifying episodes of violence brought home to Wamuyu the urgent need to develop a strong culture of peace recognising that at times women themselves colluded with violence or abuse. “I believe that peacemaking is at the core of a woman’s heart.”

Wamuyu Wachira was elected co-president of Pax Christi International in 2019.  She is currently a Lecturer and Programme Leader in Peace and Conflict Studies at St. Paul’s University in Nairobi. Wamuyu was a participant in the conference on nonviolence and just peace jointly held by Pax Christi International and the Pontifical Council for Justice and Peace Conference in Rome in April 2016. Wamuyu is a member of the advisory committee for the IBVM-UN Desk, New York. She is coordinator of the Justice, Peace, Integrity of Creation (JPIC) Eastern Africa Province and a member of the Board for Abundant Life Centre, started with the aim to train and advocate against Female Genital Mutilation in Kenya.

Permanent link to this article: https://paxchristi.org.uk/resources/peace-people-2/wamuyu-wachira/