8th August: In advance of the No Faith in War protest against the Arms Trade on 3rd September: Report in The Universe here

24th July: As we hear the news of the appointment of Boris Johnson as Prime Minister, Pax Christi worked with ecumenical partners in the Network of Christian Peace Organisations, to release a press statement calling on Boris Johnson to prioritise peace.  Read the letter  here and the report in The Universe here

30th July: We are preparing to protest against the arms trade during the DSEI Arms Fair in London in September. A press release ahead of the event is  here. The DSEI Arms Fair will be going to Japan in November. Pax Christi Asia-Pacific Facilitation Committee issued this statement. 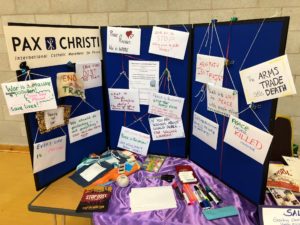 June 26-28th Pax Christi International AGM : Representatives came from Pax Christi sections around the world, to Brussels. Our Director, Theresa,  attended, with UK Executive and International Board member Ann Farr.  Delegates shared news of the range of work we are doing in our different contexts – from advocacy with indigenous communities, to providing peace education at all levels, to protesting against nuclear weapons and more. We elected new co-presidents bishop Marc Stenger and Teresia Wamuyu Wachira, as well as new members of the International Board. A moving ceremony was held to present the Pax Christi International Peace Award to the European Lawyers for Lesvos group, represented by Phil Worthington: More details here. On the second day, delegates worked hard to discern the best ways for Pax Christi International to build on all the good work which has been done and to continue to move forward strongly. We ate a meal together and celebrated the inspirational work of outgoing co-presidents Marie Dennis and Kevin Dowling, as well as our own Ann Farr whose highly-effective term on the International Board finished at the same time. Theresa and Ann presented Marie Dennis and Kevin Dowling with cards and peace medals in appreciation and gratitude from the Pax Christi UK section: Picture here.

Full report on Pax Christi International AGM, with photos, is here and here 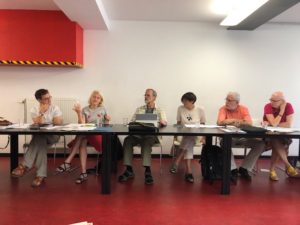 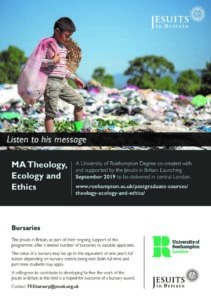 June 2019: On Saturday 6th June people from across the country came together to remeber Barbara Eggleston, an inspirational leader of Christian CND. 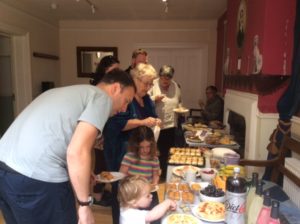 Friends join in celebrating the life of Barbara Eggleston

campaigning, planning and sharing ideas as well as fellowship.  We heard from Bruce Kent and also Valerie Flessati who gave a great talk on the challenges that Barbara had faced in her time working for Christian CND as well as all the wonderful contributions made by Barbara throughout her time working with CCND. 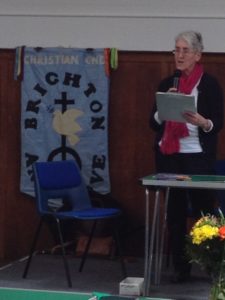 Valerie Flessati speaking at the event

Barbara’s personality and gifts made a huge difference to CCND and the wider peace movement.  On her serious side she was really thoughtful about the meeting point between religion and politics. She embraced the tradition of linking peace themes with the theology, worship and symbols that were familiar to Christians.

You can read the full talk from Valerie Here.

It is intended that this event is the start of an annual lecture in her memory. You can find more infomation on Christian CND here and view more photos from the day here.

18th May Our AGM  There was an impressive turnout of Pax Christi members and supporters for our Annual Gathering and AGM on 18th May. We said goodbye to three brilliant executive committee members: Jan Harper, Emma Atherton and Helen Gilbert – and welcomed Joan Sharples and Henrietta Cullinan.  Members shared thoughts and news from around the country to help shape the year ahead. We heard from our National President Archbishop Malcolm McMahon who encouraged us, as peacemakers, not to be silent but to speak God’s word which sets people free. We were moved and inspired by four Pax Christi Peace Award winners : Father Joe Ryan of St John Vianney parish, peace historian Peter van den Dungen, and Anna and Eleanor Marshall who think working for peace and justice is ‘obvious’.  We celebrated Mass together and renewed our commitment to love even our enemies. The busy day was lifted by live music from the excellent King Toadfish and the All-Weather Riders. 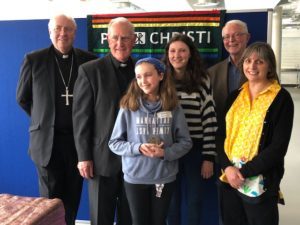 May 2019: The Interfaith Working Group on Nuclear Disarmament delivered a powerful statement at the PrepCom Nuclear Non-Proliferation Treaty Conference at the United Nations in New York Today: 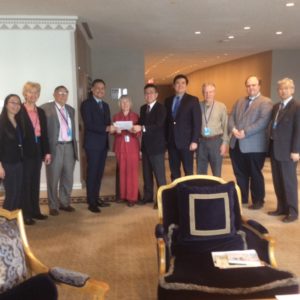 ‘At this Preparatory Committee session, we strongly urge all States to engage in constructive dialogue toward the shared goal of a world free from nuclear weapons’. The statement was signed by a wide range of faith groups. Our President Archbishop Malcolm MacMahon signed the statement on behalf of Pax Christi UK.  InterfaithStatement

Pictured are Pax Christi members Patricia and Michael Pullham and friends handing in the statement in New York.

May 2019: View a round-up of the year to date in our Annual Report 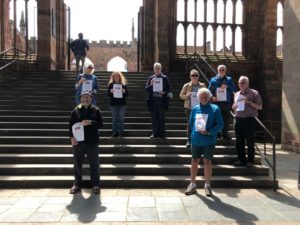 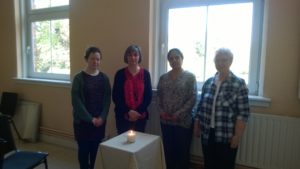 A beautiful sunny day in which to think of the witness of conscientious objectors. There were two gatherings in Liverpool supported by Pax Christi members: 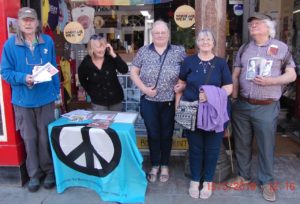 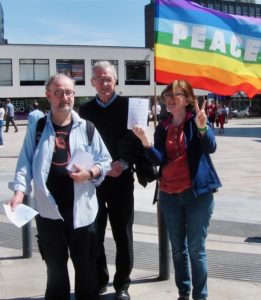 And a gathering in London too.  Pax Christi members were part of the group of about 200 people, including some descendants of First World War COs, gathered at the Conscientious Objectors’ stone in Tavistock Square for the annual commemoration ceremony.

May 2019: The Interfaith Working Group on Nuclear Disarmament delivered a powerful statement at the PrepCom Nuclear Non-Proliferation Treaty Conference at the United Nations in New York Today: 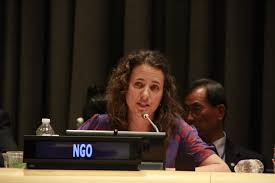 ‘At this Preparatory Committee session, we strongly urge all States to engage in constructive dialogue toward the shared goal of a world free from nuclear weapons’. The statement was signed by a wide range of faith groups. Our President Archbishop Malcolm MacMahon signed the statement on behalf of Pax Christi UK.  InterfaithStatement 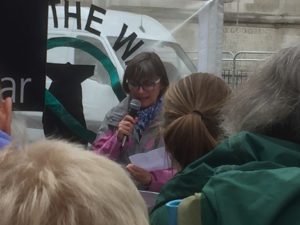 May 2019:  Friday 3rd May saw Pax Christi and hundreds of other peace activists come together from across the UK to protest outside Westminster Abbey. The Abbey had decided to hold a ‘National Service of Thanksgiving’ for 50 years of British nuclear weapons at sea. In the run up to the event a petition had been given to the Dean of Westminster calling for the event to be canceled and asking if nuclear weapons were really something we should be thankful for.

Representatives from Pax Christi, Fellowship of Reconciliation, Network of Christian Peace Organisations and many others including sisters from several religious congregations attended the protest on the day. A short peace service was held with Scripture readings and inspiring words and prayers from Burce Kent (CND), Fr Joe Ryan (Westminster Justice and Peace), Paul Parker (Quakers in Britain) and Rev Matt Harbage from London. On the other side of the road, CND staged a ‘die in’ and all of this received good news and media coverage. 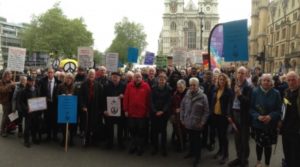 There were mixed emotions as we all gathered outside Westminster Abbey that day. On the one hand it was tragic to see Westminster Abbey being used to celebrate something so awful and destructive as nuclear weapons and yet we were all inspired I think by the strength and unity showed between Christians who like the vast majority of the public oppose nuclear weapsons. It is always good to remember that we are not alone in our work for peace.

Permanent link to this article: https://paxchristi.org.uk/news-and-events/news-reports/2019-1/