Responses and alternatives to military strikes on Syria 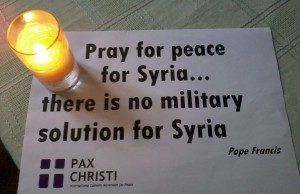 We urge our members and supporters to contact their MP NOW to challenge the military  actions taken against Syria.  Say that you do not support this escalation of violence, it is not done in your name.  Ask how it is possible for such action to be taken without reference to Parliament.  Use some of the practical alternatives suggested in statements below to put a case for diplomacy, engagement, non-military responses to the on-going crisis in Syria, including the use of chemical and other weapons  systems. Link to find your  MP

Bruce Kent challenges legality of air strikes on Syria .  The Charter of the United Nations was signed in June 1945. Its prime purpose was to ‘save succeeding generations from the scourge of war’. Any independent decision by a country to go to war was ruled out. The only exception was in Article 51 which allows self-defence after an attack by another country— but only until the Security Council has taken charge of the situation. Even the Security Council only has ‘primary’ responsibility (art.24.1). After that comes the General Assembly.  16 April 2018

Pax Christi International Statement : Pax Christi International deeply believes that the possible air attacks by the U.S. and its allied countries shouldn’t be the response to this recent chemical weapons attack because they will cause further suffering of innocent Syrian civilians and could escalate into a wider conflict between countries. We fear that in these last days the war in Syria has reached a dangerous turning point with violence-inciting rhetoric and call upon world leaders to immediately stop any further military steps. It is our view that a fully inclusive and nonviolent political process through diplomacy and dialogue is the only way to end this brutal conflict…14 April 2018

Attacking Assad: to do or not to do.  Article from Prof Paul Rogers. There is no easy, immediate and clear-cut alternative, and the situation is made worse by the current antagonism between the west and Russia. By far the strongest argument against attacks is that war will most likely make matters much worse. Nevertheless, some other approaches can be recommended… 13 April 2018

Rethinking Security response to planned military action. This new crisis demonstrates the abject failure of current approaches to global security. We urge the government to desist from compounding the failures of its policies towards the Middle East, to cease its military interventions and to end arms exports to all parties in the region. We call for an urgent and comprehensive rethink of the UK’s approach to security and international relations, based on systematic commitment to its declared values of human dignity, human rights, freedom, democracy and equality. 13 April 2018

US Catholic Leaders urge diplomacy for Syria.  We invite people of all faith traditions to join us in prayer and action for peace, as we call upon our nation’s leaders to work for a negotiated solution to the war in Syria, and for a humanitarian solution to the tragedy of the millions of Syrian families displaced by the war or seeking refuge in other countries, including our own.

More bombs in Syria will help no one: Article from Prof Maryann Cusimano Love.  There are many ways the United States can help: President Trump can increase U.S. humanitarian aid; accept refugees from Syria; help frontline states Turkey, Jordan, Lebanon, Egypt and Iraq minister to the victims; press for humanitarian access corridors so aid can reach the war-torn Syrian population; and press for the implementation of a ceasefire to accompany the start of peace talks…. 9 April 2018

Permanent link to this article: https://paxchristi.org.uk/2018/04/14/responses-and-alternatives-to-military-strikes-on-syria/