World Week for Peace in Palestine and Israel 2019

Peace in Palestine and Israel is an important, longstanding campaign issue for Pax Christi both here and internationally. We hear from our partners in the region distressing accounts of deep and worsening injustice, violence and suffering with no end in sight. The World Week for Peace in Palestine and Israel is from 15th-22nd September. We have created a range of useful resources here  Please use them to support the struggle for a just peace out of this unbearable conflict. 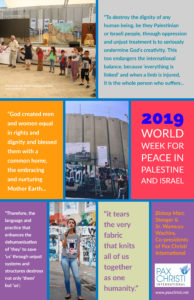 The World Council of Churches’ theme is Humanity and Equality in God’s Creation. Pax Christi International have issued a statement  drawing attention to the inequalities in law: ‘For Palestinians living in the West Bank, East Jerusalem and the Gaza Strip, the assault on their humanity and human rights is constant and pernicious.’ 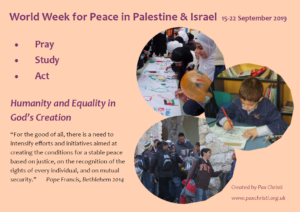 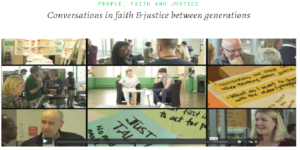 Pax Christi, along with other organisations, has been involved in organizing a series of fascinating inter- generational conversations. The conversations have taken place around the country and brought together people from different generations to discuss their faith and its role in their engagement in justice and peace. As well as feedback being given to the Bishops of England and Wales at the current Synod on youth in Rome, Pat Jones has written an insightful article, ‘Bursting the Bubble’, for The Tablet on the conversations and what we can learn from them. You can visit the website at www.peoplefaithjustice.org.uk for more information on the conversations, including some interesting videos and resources to hold your own inter-generational conversation.

Permanent link to this article: https://paxchristi.org.uk/2018/10/08/inter-generational-conversations/

Hello! I’m Aisling, the new schools and youth education worker. I’m looking forward to getting started working with young people, teachers and schools to promote peace, nonviolence and reconciliation. Please don’t hesitate to get in touch at education@paxchristi.org.uk if you have any queries, or have a look at the peace education pages for some great resources and ideas.

Permanent link to this article: https://paxchristi.org.uk/2018/09/25/welcome-to-our-new-peace-education-worker/ 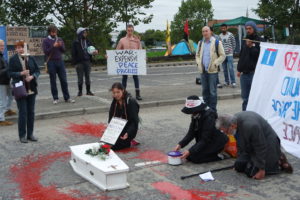 The third in our joint Pax Christi/Quakers in Britain Religious Studies A-Level series of lessons has been published.

The new lesson, The Peace Movement, examines a variety of peace organisations inviting students to critically assess their motivation and inspiration, their work and its effectiveness, and what opposition or barriers they face.

Sitting alongside existing lessons The Christian Contribution to Issues of War and Peace and Pacifism – Practice and Practicality this new lesson completes a high quality set of lessons for students studying war and peace as part of their A-Level Religious Studies curriculum.

All of our A-level RE lessons can be found here. 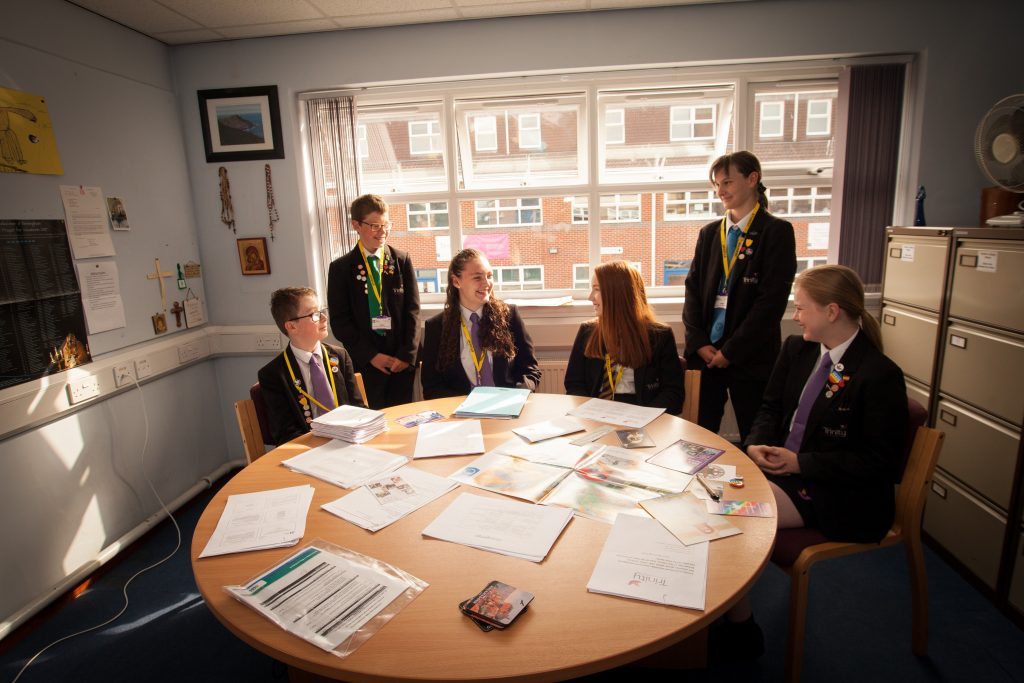