Pope Francis, Easter message 2021: “social and economic crisis remains severe, especially for the poor. Nonetheless – and this is scandalous – armed conflicts have not ended and military arsenals are being strengthened. That is today’s scandal.” In the midst of the Pandemic we have seen 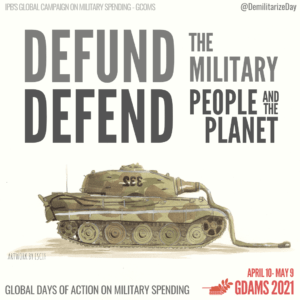 Pax Christi has been an active member of the Global Days of Action on Military Spending (GDAMS) since 2011.  The days coincide with the release of the SIPRI figures on world wide military spending.

Join with others around the country to mark these days. Make the connection between the crises of the pandemic and the climate emergency and the way militarism exacerbates both,  squandering vital public resources and undermining essential international cooperation.

Dates for actions and sharing the message 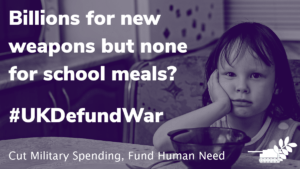 Useful resources for use any time

–  Watch the GDAMS video UK Military Spending Briefing, March 2021
–  Use one off the powerful Social Media images to make your own poster or share on FB, twitter or emails.
–  Sign / share  one or two of these petitions
–  Write to your MP to protest about the vast military spending, including the recent proposed increase in nuclear warhead and suggest what you would prefer your money to be spent on.
–  Watch Give Peace a Budget, film made by Pax Christi in 2013 but still relevant today
–  Read and share Prof Paul Rogers article on the March 2021 Defence Review

Permanent link to this article: https://paxchristi.org.uk/campaigns/security-disarmament/common-security/