News of our World Assembly in Bethlehem, Palestine 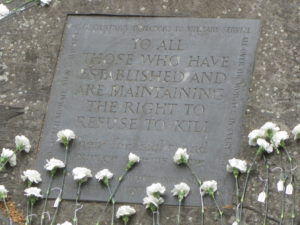 On 15 May about 150 people – including visitors from New Zealand and Australia – gathered by the Conscientious Objectors’ stone in Tavistock Square to commemorate COs worldwide. Pax Christi is one of the organisations behind the annual event, which this year focussed especially on the contribution of women war resisters and peacemakers.

In this centenary year of the Women’s International League for Peace and Freedom, Sheila Triggs spoke about the difficulties which had to be overcome by the women who planned the 1200-strong international Women’s Congress in The Hague in 1915.  Afterwards they had visited political leaders in both neutral and belligerent countries, proposing a negotiated end to the First World War.  No warring nation accepted this challenge, believing that they might still gain the military advantage.  The women laid the foundations for the League of Nations, and campaigned for welfare reforms.  In April 2015 women from 80 countries took part in an anniversary conference in The Hague to map out the ongoing work of WILPF.

Another speaker was Mia Tamarin, who in 2008 joined the growing number of Israeli teenagers who refuse to perform the compulsory military service required after leaving school.  Mia served several months in prison.  The purpose of the movement is an end to the Occupation of Palestine (rather than pacifism as such).  Even amongst conscientious objectors, the stand taken by female COs was regarded as of lower value than that of their male colleagues.  However refusal attracts abuse and controversy, with lasting consequences for all of their lives and careers.

Flowers were laid on the memorial stone as names of 70 representative conscientious objectors from different countries and centuries were read out. 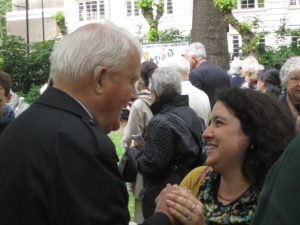 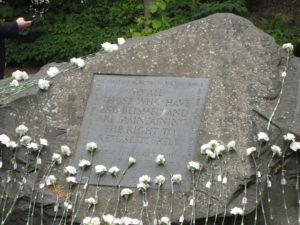 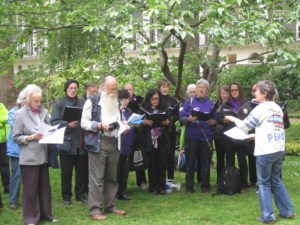 The choir leading the singing

Permanent link to this article: https://paxchristi.org.uk/2015/05/15/international-conscientious-objectors-day-ceremony/