News of our World Assembly in Bethlehem, Palestine

Ellen Teague and Chris Cole near the Banksy art-work, Bethlehem

Sadly, two important members of the movement were missing, Jose Henrique, International Secretary of Pax Christi was refused entry as he tried to enter Israel/Palestine through Jordan and Bishop Kevin Dowling from South Africa unable to attend because of illness.

The opening ceremony included speeches from HB Michel Sabbah, former International President, Marie Dennis, Co-President  and many more, all praising the work of Pax Christi and its members around the globe.

During the Assembly, participants  took part  in  ‘Walking Paths’, exposure visits exploring aspects of life under occupation in Palestine; commemorations of the Nakba and the Pax Christi International Peace Award Ceremony. 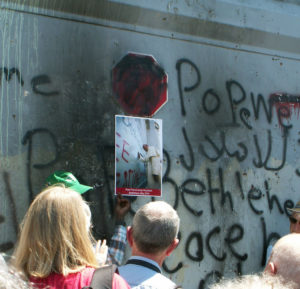 Two documents came from the gathering

The Bethlehem Commitment: Bringing the future into focus 2015 – 2020, a document for inspiration, forward planning to help the Pax Christi family all plan for the coming five years and the statement on Palestine calling for recognition of Palestine, end to settlements and support to the nonviolent struggle for justice and peace.

You can read a series of excellent articles written by Ellen Teague:

Delegates also had meetings with Israeli peace groups such as Rabbis for Human Rights, B’tselem, the Israeli Committee Against House Demolitions  and Women in Black

Permanent link to this article: https://paxchristi.org.uk/2015/05/17/news-of-our-world-assembly-in-bethlehem-palestine/