Over 130 countries are continuing negotiations to outlaw nuclear weapons entirely.

A second round of meetings began in New York on 15 June to draft a Nuclear Weapon Ban Treaty. If approved, this treaty would make it illegal to “develop, produce, manufacture or otherwise acquire”, to use nuclear weapons. The ban treaty is strongly supported by, among others, the International Committee of the Red Cross/Red Crescent, the World Medical Association, the World Council of Churches and the Vatican.

“It is a tragedy and we believe a gross failure of duty, that the UK Government will take no part in these meetings, despite pleas and lobbying for months in advance of the meetings”, said Philip Austin of the Network of Christian Peace Organisations. “The permanent members of the UN Security Council, including the UK, have a responsibility to move the world beyond fear.”

Negotiations have been boycotted by all existing nuclear weapons states, as well as many countries which have nuclear weapons located on their soil. In a joint statement the UK and USA argued that existing treaties provide a framework for disarmament, but other countries have moved ahead with the talks because they have not seen ‘good faith’ efforts by nuclear states to disarm.

In a joint statement, the Methodists, Baptists, United Reformed Church, Church of Scotland and Quakers said: “We believe that the possession and threat of use of nuclear weapons is a sin against God and humanity. We repent of our complacency in allowing this state of affairs to continue for so long … We affirm that the trillions of dollars being squandered on these weapons are, in the words of President Dwight D Eisenhower, ‘a theft from those who hunger and are not fed, those who are cold and are not clothed’.”
A nuclear weapon ban would mirror the existing bans on other inhumane weapons systems, such as biological and chemical weapons. Negotiations are covering not just the outlawing of nuclear weapons, but also how to monitor and verify compliance. International bans and treaties of this kind have had huge moral and legal significance in creating peace in our world.

Pope Francis, to the March gathering which started the process stated “the ultimate goal of the total elimination of nuclear weapons becomes both a challenge and a moral and humanitarian imperative. A concrete approach should promote a reflection on an ethics of peace and multilateral and cooperative security that goes beyond fear and isolationism in many debates today.”

Full set of photographs from the gathering. 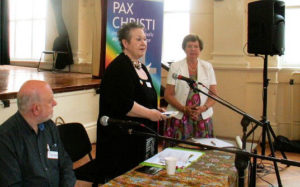 They came from north, south, east and west  to London for the gathering which presented highlights of Pax Christi’s work and facilitated conversations  on opportunities for peacemaking,  including how to use Remembrance to unlearn war, how to inspire  young peacemakers, and how to open our imaginations to promote Gospel nonviolence.  The gathering learnt  of  the work of Pax Christi International through an interview with general secretary Greet Vanaershot and celebrated the peacemaking witness  of Nan Saeki and Rev Gyoro Nagase. (See below)

In his message to the gathering President, Archbishop Malcolm  McMahon said: Last year I was on pilgrimage to the Holy Land and once again I was horrified by the injustice that prevails there.  Pax Christi’s determination to achieve a just settlement for the Palestinian communities witnesses to the love of Christ in the land where he walked.  In an age when countries are increasingly turning in on themselves and putting themselves first we must continue to be brave and look outwards to those who need Christ’s peace

Chair, Holly Ball  identified five strategic aims  that form Pax Christi’s planning for the years ahead: developing a nonviolence theology and working with the Catholic Nonviolence Initiative; creating and supporting a community of peacemakers; strengthening our peace education work; planning for a smooth transition in leadership and ensuring financial stability to underpin our aims. Working groups are in place and carrying forward our vision.  Pax Christi said farewell to Davina Bolt who stood down from the Executive Committee after ten years and welcomed Laura Atherton, elected  as a new member. 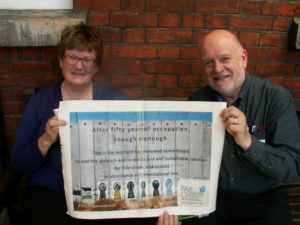 Participants also wrote  messages of support  partners in Bethlehem who commemorate 50 years of occupation this week.  This coincides with a statement  by Pax Christi calling for greater action for peace for the region, including a ban on the sale of military goods and military cooperation with Israel.  Prayers for the people of Palestine were also offered in the liturgy.

International Secretary Greet Vanaerschot painted a powerful picture of the global network of peacemakers within Pax Christi and lamented that at times we are too humble in the way we promote and present ourselves to the world.  The challenge is how best to support the growth of the movement in the global South. She also acknowledged the recent attacks in the UK (sadly another attack took place later that 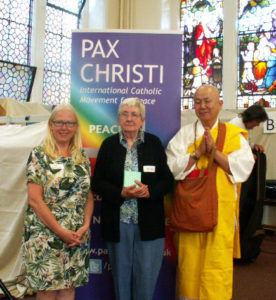 night) which highlight the need for more dialogue,  understanding and support for peacemaking processes  within communities and between countries – this is where Pax Christi is already engaged and where we have much to offer.

The work of peacemakers past and present was celebrated in words, song and  action as Nan Saeki and Rev Nagase  received the 2017 Peace Award.

A further report on the gathering here

Every two years Pax Christi, the international Catholic movement for peace, honours the work of unsung
and unknown peacemakers as a way of acknowledging the essential daily work of peacemaking. The first awards were given in 2001 and since then thirty-one women and men have been recognised in this way.

The awards  were presented by Greet Vanaerschot, General Secretary of Pax Christi International.   The 2017 award is a peace medal created by the artist Natasha Ratcliffe with the title P(lease) E(ngage) A(ll) C(ommunities on) E(arth). 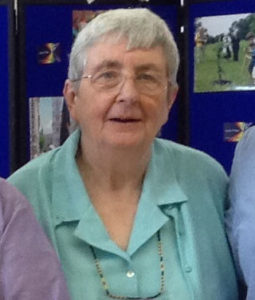 Nationally Nan has been Chair of National Justice & Peace Commission and for many years a member, and Treasurer of Pax Christi’s Executive Committee, perhaps her first love. Nan understands the importance of local groups, and of the friendships and networks these can form across communities. A founder member of York Ecumenical Justice and Peace group and an active participant, she has a special gift of welcoming new people. She is involved with various York organisations including City of Sanctuary, and Friends of St Bede’s Pastoral Centre.

Nan was a prison visitor for 6 years, and she represents NJPN on the CSAN Criminal Justice Forum. Nan was a member of the chaplaincy team and a governor at All Saints School. She supports the Fairer World shop in York, maintaining a regular stall in her parish. Nan is an active member of Middlesbrough
J&P Commission, at onetime as Chair, and currently as Treasurer

Rev. Nagase has lived in Battersea Park, London since 1984 where he is responsible for the care and upkeep of the London Peace Pagoda. Rev. Nagase is a monk of the Nipponzan Myohoji Buddhist Order founded 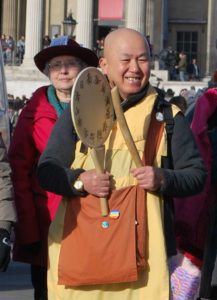 in 1917 by the Most Venerable Nichidatsu Fujii. Faced with the devastation of WW2, in 1947 Fujii Guruji determined to build Peace Pagodas in Japan and across the world to inspire peace and provide a focus for all to unite in working for reconciliation and harmony.  Rev. Nagase first came to England in 1978 to help with the construction of the Milton Keynes Peace Pagoda. Rev. Nagase has become part of local, national and global peace-making networks.  He is a regular participant in the Westminster Interfaith Peace Walks, the Pax Christi  Ash Wednesday Witness for Peace at the Ministry of Defence and Franz Jagerstatter Memorial Service on Nagasaki Day, London Catholic Worker Peace Actions, & Hiroshima Day Commemorations  in Tavistock Sq; the Japanese Against Nuclear weekly Friday demonstrations outside the Japanese Embassy and TEPCO in solidarity with the people of Fukushima. 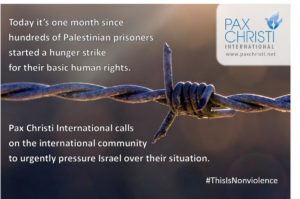 Pax Christi International calls on the international community to urgently pressure Israel over the situation of Palestinian prisoners.    Pax Christi International, together with its member organisations (1) and partners (2), is deeply concerned about the situation of Palestinian prisoners in Israeli prisons—especially those who have been on a hunger strike for one month and whose situation is deteriorating. Their health is in danger and they are being subjected to violent and coercive measures and policies by the Israeli Prison Service and special units, attempting to push the prisoners to end their hunger strike. (3) – See more 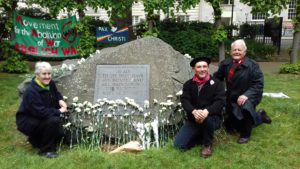 Pax Christi members joined with more than a hundred people who gathered in London on 15 May for the annual commemoration of International Conscientious Objector Day.  Pax Christi’s Valerie Flessati welcomed everyone to the event where powerful presentations were offered by Nick Jeffrey, a Vietnam draft resister and Mark Rylance, actor and peace campaigner.  This event was organised by the First World War Peace Forum.

Here you can view a video of the event

You can read a full account of the event here

We also have reports of the Leicester event, held on 14 May. They  read out the names of some of those who are currently in prison around the world (in countries that include Israel, Eritrea, Singapore, South Korea, Turkmenistan and Azerbaijan) for refusing to fight. More here.  In Sheffield giant white  poppies formed part of the vigil/display held in the city centre on 13 May. 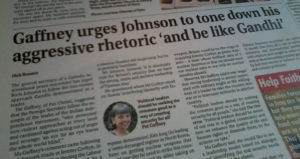 The Tablet 5 May has a Parish Practice from Pax Christi which offers opportunities for creating activities in parishes to promote Gospel nonviolence.  In The Universe there is an interview with Pax Christi’s Pat Gaffney on the models of leadership we should be encouraging within the political environment.

Images of First World War COs

REMEMBERING THE MEN WHO SAID “NO”!

Sir Mark Rylance, acclaimed in many roles from Thomas Cromwell in Wolf Hall to Roald Dahl’s BFG, will be speaking at the annual Conscientious Objectors’ Day ceremony held in Tavistock Square, London WC1 at 12 noon on Monday 15 May.

He will introduce and read from the play Not about Heroes – which features the First World War experience of Siegfried Sassoon.

2017 is the centenary of US entry into the First World War.  It is also 50 years since the US became more deeply entrenched in its disastrous war in Vietnam.  Nick Jeffrey, who resisted the US draft, will also be speaking at the ceremony.

The names of conscientious objectors representing all countries and all times in history will be read out, as flowers are laid at the CO memorial in the square, and a minute’s silence will be observed.  Sue Gilmurray will lead the music with Raised Voices choir.

Every year since 1982 15th May has marked International Conscientious Objectors’ Day – to commemorate those who have resisted and those who continue to resist war, especially by refusing military service.

The national commemoration in London is organised by the First World War Peace Forum – a coalition of 12 national peace organisations, including Pax Christi

Elsewhere in the UK the following events are being organised to commemorate International Conscientious Objectors’ Day 2017.

Permanent link to this article: https://paxchristi.org.uk/news-and-events/news-reports/may-june-2017/