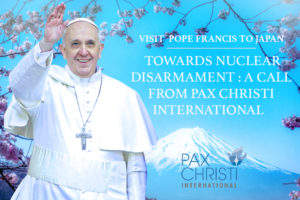 Pax Christi International’s Nuclear Weapons Ban Treaty Working Group and the Asia-Pacific Facilitation Group jointly drafted a statement to coincide with this important opportunity to advocate for an end to nuclear weapons.

‘Here is an opportunity for the leaders of nuclear weapons-possessing countries such as the United Kingdom to demonstrate creative, moral courage.’

We pray for a change of heart among those world leaders who have been so slow to act on this issue.

Permanent link to this article: https://paxchristi.org.uk/2019/11/29/pope-francis-visits-hiroshima/